This Dark Magic by Chryse Wymer 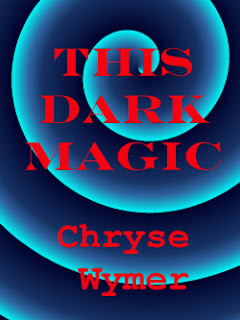 Book Description
Capital City is a tough-as-titanium riotous town, but it wasn't always that way. Only a month ago, it was a placid place to live. In this quirky dark fantasy novella, Charlie Landers must navigate a dangerous world of black magic in order to save his little corner of the universe. Somewhat silly, and crap-your-pants scary in places.
Review
*I received this e-book from the author for review*
I went into this book with a bit of an acknowledged prejudice against independently published authors. My previous experience had not been good. Initially I wasn’t going to review This Dark Magic, but I thought I’d give this book a chance to change my mind.
First thing I noticed about This Dark Magic was that it had been edited well. Now you may think all books would be thoughourly edited, but my experience with IM’s says otherwise. So straight away I started to be less cynical about this book.
The first problem with the book that I encountered, was the metaphors and similes used in This Dark Magic to describe situations e.g. “The skyscraper resembelled a rectangular soup can, not  brooding and cool but ugly and barely functional”. While I think I got the general idea of what Wymer was portraying with this metaphor i.e. that a soup can in the form of a rectangualr prism would be not as functional as a round one etc., I think a general description of the scene would have given more insight into what I should be imagining. A metaphor could have been used to highlight the description.
In addition, I think more description would have also helped with the pacing of the story. For such a short book, the pace of the story felt surprisingly slow. There were times when the book jumped from one description, to another, without explaining what happened in-between or making appropriate transitions. For example, the story went from describing the skyscraper, directly to this quote: “Fifth floor. The elevators were down so I took the stairs two at a time, wheezing by the time I hit the third floor.” The problem: what happened between being outside in the car and climbing up the stairs? The change seemed noticeable and I was momentarily confused. Likely because there was no real reason to end and begin at those places in the story.
The writing was a little stilted. In the same manner as the scenes jumped, a lot of small sentences were used to quickly jump through the story and while this is perfectly fine grammatically, I found that reading the story was a little impersonal. I found it hard to relate to the characters and easily follow what was happening. However, while the story didn’t always flow smoothly, the short sentences did create an appropriate atmosphere. The short sentences heightened the feeling of desolation within the fractured city and from the city residents (including Charles). I wouldn’t like to read a full length novel written in a similar manner, but for a short story it was distinctive.
So, what did I enjoy about the book? The idea about a city, which had a massive rise in killings and crime, was good; and the main storyline about a journalist who was looking into a story when he was cursed with dark magic was also promising. I also enjoyed the way the sentences were composed, in an English skill sense. It was evident that the author has a talent for writing and will likely improve her storytelling. Alot of the phrases were witty and cleverly composed. In addition, the book got more enjoyable towards the end. It was less confusing with a reduced amount of jumping between scenarios.
In general, for the first book of an independent author, I think the story was good. For an e- book that only costs $0.99 to buy at Amazon, I would recommend that fans of Urban Fantasy give this book a go. It fills a good market niche for people wanting something to read immediately when they have already maxed out their book budget. I was happily surprised by the quality and I think a lot of other people will be as well. I personally, don’t often read short stories and for people who do enjoy them more than me, it’s likely you will enjoy this book more than I did. If the book was compared to full length novels then areas such as world building and character creation could be further explored. However, these aspects can’t be expected to be explored in more detail, in such a short amount of time.
My rating out of 5:
3/5
Posted by Kaza (UF/PR series) at Sunday, February 13, 2011

3/5 = Good -  A good read but I'm not hanging out for the next installment, but will read it to see if there is an improvement.

2/5 = Okay - I finished it but was disappointed. I won't be reading the next one unless it looks better.

1/5 = Terrible - I couldn't finish it bored me to tears. Will avoid in the future.